The Dry fruits of Balochistan  demand increases with the arrival of winter. Dry fruits are the survial capsules in the cold areas. The demand not only comes from Balochistan but whole the country is fond of these nuts. Balochistan is producing 90 percent of all grapes, cherries and almonds, 60 per cent of peaches, pomegranates, apricots and 70 per cent of all dates produced in Pakistan.
There are multiple types of dry fruits in Balochistan. Pakistan is enriched many kind of natural jungles of different dry fruits like Chilghosa or Pine Nut, Wall nuts or Akhrot in Urdu, Dates or Khajoor, We can see a giantic trees of Wallnuts, Persimmon fruit (Japani Phal,جاپانی پھل) and Apricot etc, although the last two are not dry fruits.
The Shina Ghara – (Greenish Brown jungle) in the district Zhob, of Balochistan, is very much rich in natural jungle of Chilghoza and Zatoon (Pine Nut and Olive).
In the plains of Balochistan like Kech and Makran district of Balochistan, there are numerous jungles of Dates or Khajoor. The date of these are considered one of the best dates in the world.
Secondly, the area named as Dhaki in between Dera Ismail Khan and Mianwali is also one the biggest market of dates in Pakistan. In Dhaka their is big variety of dates. The quality is also superb.
On the other hand, we can see the sky kissing trees of coconut and in the coastal areas of Balochistan like Lesbela and numerous areas in district Turbat.
Same as District Loralai and Kolhu of Balochistan are not far behind the in their productivity. You can see a big variety of almonds in these areas. These areas are also very much rich in natural resoruces like oil, gas and coal.
Same as grapes of Zhob, Chamman, Sanjavi and Muslim Bagh are also of very good quality and variety which leads to raisins (Kishmish).
Quetta or Balochistan is connected with two boardering countries Iran and Afghanistan, which are also very rich in the production of different dry fruits. Quetta has en edge of connection with Indian Ocean also. Gawadar is going to become the biggest hub for the world after the completion of CPEC route in Balochistan. This route will connect Balochistan with China directly. So, the import of dry fruits of
Hence, Balochistan is very rich in multiple types of natural resources.
We are going to discuss different kinds of dry fruits available in Balochistan. People often enquire about the dry furits of Balochistan, becuase there is big variety of fresh dried fruits. 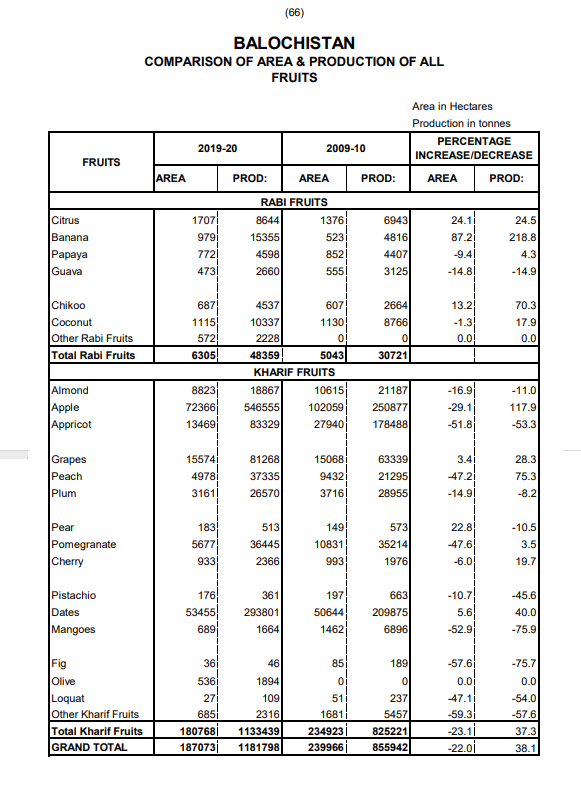 Click here to get full Agriculture Statistics Balochistan – 2019-20 – Page No.66

What are the types of dry fruits?

Among the list of dried fruits, pistachio is one of the most popular. Pista comes with a wide variety. Salted unsalted is also another variety of pista. Roasted un roasted both are liked by the people. Pistachios are the most important ingredient of dry fruits. It is not only delicious but it has many health benefits also.

While talking about the farming of pistachio in Balochistan, has incredible potential. No doubt pistachio farming in Balochistan can lead to bigger volumes of business and profit ratios. But farmers of Balochistan don`t focus too much on pistachio as compared to other fruits.

According to an experiment growing pistachio plants in the vast but dry and arid plateau gives amazing results leading to establishing the hope that this dry temperate zone is highly congenial to growing dry fruit.

Although growth is not too much, it is available abundantly in the Dry fruit wholesale market in Quetta.

How many pistachios should you eat a day?

The majority of dietitians advise their patients to limit their daily pistachio intake to no more than two ounces (56 grams). That equals 90 pistachios when they are shelled. Nutritionists also urge consumers to consume enough water to aid with digestion. Pistachios may cause stomach distress if you don’t avoid them.

There are multiple health benefits of pistachios.

Pakistan is the world’s largest producer and produces around 300,000 tons of fresh apricot. Major producers are Balochistan and Gilgit-Baltistan (GB). There are different agroecological zones in Balochistan. These different zones help in the growth of different fruits, due to which Quetta is called the fruit basket of the country. Apricot, is a fruit tree cultivated throughout the temperate regions of the world. The atmosphere of Balochistan is favorable for the growth of apricot.
Apricot a stone fruit. Among all dry fruits, the Apricot also holds a special place. Apricots represent the family of peaches, almonds, cherries, and plums.  They are eaten fresh or cooked and are preserved by canning or drying.
Flavor liqueurs are often made with Apricots, and the fruit is also widely made into jam.

What kind of fruit is an apricot?

Stone fruits
Stone fruits called apricots (Prunus armeniaca) are also referred to as Armenian plums. They have a peach-like shape and are yellow and round, but they also have the same acidic flavor as purple plums.
Apricots are a good source of vitamin A and are high in natural sugar. Dried apricots are an excellent source of iron.

Dates are considered the most famous fruits of Balochistan. As discussed above Balochistan owns fabulous date farms. These farms are lush with various types of date trees. In Balochistan, Makran is well known for the farming and production of all kinds of dates. In Makran Panjgur, and Turbat districts are the main lands for date production. For industrial products and confectioneries on a large scale, Balochistan Dates are preferred and used, because of their quality and variety.

According to Gilano Dates Pakistan is the sixth largest producer of dates in the world.

The date farms contain several kinds of date trees which produce different dates. These trees produce delicious dates which are rich in taste and in great demand. In the production of dates of Makran, Balochistan is very famous. Hence, the marketing system needs improvement to a considerable extent.

Different Types and Names of Dates

The above list must not be considered as the types of dates only. The above list pertains to the dates produced in Makran specifically. So, many of them belong to, named as the name of the date farm owner.

How many dates eat per day?

Having five to six dates per day is enough for your health.

Northeastern Brazil is the cashew’s natural habitat. In the late 16th century, Portuguese missionaries brought it to East Africa and India, where it flourished at low elevations close to the sea. Unfortunately, it is not cultivated in Pakistan.

Pakistan imports Cashew nuts from Brazil and Dubai. Indian cashew nut is exported to Pakistan by various vendors in Dubai.

The dry fruits market in Quetta is full of cashew, you can find roasted, and unroasted cashew nuts, at economical prices. it is the quality of the market of Quetta that you can get fresh dry fruits every time. You can also order online.

How many cashew nuts should I eat a day?

You should eat 15-18 cashew nuts a day.  To get some great benefits, the average amount should be consumed.

Where are cashews grown in Pakistan?

Cashews or cashew nuts are not cultivated anywhere in Pakistan. Cashew is always imported from Brazil or Dubai directly or indirectly.

For the growth of almond trees, the climate of Balochistan is very suitable. Almond is cultivated in many sub-regions of Balochistan, but District Loralai and Kohlu hold a special rank. There is also a big variety of almonds grown in Balochistan. You can find many varieties of almonds in the dry fruit market of Quetta.

It is said that the almond and its species are to Iran and surrounding countries like Pakistan. The almond tree needs a moderate Mediterranean climate with cool winter weather.

California is the biggest producer and caters to almost half of the world’s almond demand.

Where almonds are grown in Pakistan?

From the Karakorum Mountains in northern Pakistan pakka badam comes. Balochistan is also famous for the almonds in Pakistan.

What country imports the most almonds?

Germany was the largest importer of shelled almonds worldwide in 2021.
Spain and France were alsoAmonge the top importers, France and Spain hold significant higher ranking ,

There are infinite healthy benefits of almonds. All could not be counted even. The biggest one is almonds increase mental alertness.

Walnut is considered the Gold of Pakistan. Walnut trees are the native species of Pakistan. There are almost 226 local walnut species. Growing in the Gilgit-Baltistan, Leepa in Neelum valley and Muffazarabad in Azad Jammu  Kashmir, & Malakand division including Dir, Swat, Shangla, Chital, Bunir, and Malakand Agency. Over the period of time, the production of walnut is continually reducing.

The genetically superior walnut tree can be grown in any soil and climate under a well-drained soil conditions. This commercial tree is highly suitable for cultivation in the central and northwestern provinces of Pakistan.

Walnut is declared as the native fruit tree of Pakistan by FAO in its country report. You can find walnuts in the Quetta markets abundantly.

Do walnuts have side effects?

Walnuts are high in calories and should be consumed in moderate quantities. High quantities of consumption may also lead to kidney stones. diarrhea, stomach pain, or bloating.

Walnuts are a nutritious food that provides healthy fats, fiber, vitamins, and minerals.

Raisins are simply dried grapes produced from grapes. According to history, dried grapes belong as early as 2000 BCE in Persia and Egypt. They are also mentioned in the Bible (Numbers 6:3). Grapes drying is an Indigenous profitable enterprise in Balochistan. The drying of grapes is a good source of income generation in the grapes growing area. Two remote districts in southwestern Pakistan have become the country’s top producers of sweet raisins in recent years

The main grapes-producing area of Balochistan is Zhob, Pishin, and Killa Abdullah districts. Raisina production is mostly carried out in these districts.

There are mainly two types of raisins.

Monaka: The drying process is done in the sunshine after pre-drying treatment. 3000 kg of fresh grapes produces 1000 kg of Monaka.

Kishmish: The drying process is done in a shady and well-ventilated room without any treatment. 3500 kg of fresh grapes produces 1000 kg of Kishmish.

You can get multiple health benefits from raisins.

Where do raisins grow best?

According to the President of the Farmers Association of Killa Abdullah, Kazim Khan, Killa Abdullah, Chapman, Pishin, and Zhob are the best areas for the growth of raisins. There are many Health benefits of Peanuts which are described below: Scientific name: Arachis hypogaea Many …