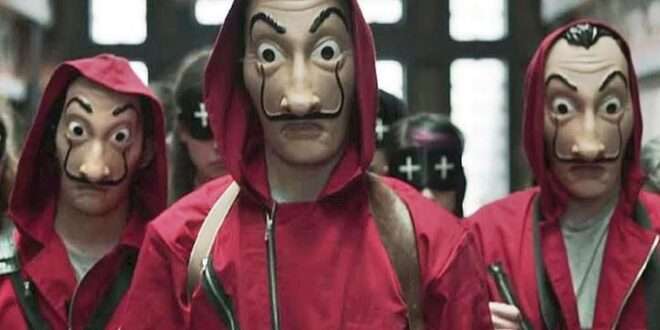 A criminal mastermind known as “The Professor” has devised a scheme to commit the largest Money Heist in recorded history: to print billions of euros in the Royal Mint of Spain. To assist him in carrying out the ambitious plan, he recruits eight people with specific skills and nothing to lose. The gang takes hostages to aid in their negotiations with the authorities, who are plotting a way to apprehend The Professor. As time passes, the robbers prepare for a shootout with the cops.

Set in Madrid, a mysterious man known as the “Professor” recruits a group of eight people who use city names as aliases to carry out an ambitious plan that involves breaking into the Royal Mint of Spain and fleeing with €984 million. After taking 67 people hostage inside the Mint, the team intends to stay for 11 days to print the money while dealing with elite police forces. Following the initial heist, the members of the group are forced out of hiding and prepare for a second heist, this time aiming to escape with gold from the Bank of Spain while dealing with hostages and police forces.

During their years of collaboration since 2008, screenwriter Lex Pina and director Jess Colmenar developed the series. After completing their work on the Spanish prison drama Locked Up (Vis a vis), they left Globomedia in 2016 to launch their own production company, Vancouver Media. They considered filming a comedy or developing a heist story for television for their first project, the latter having never been attempted on Spanish television before. They created Money Heist with former Locked Up colleagues as a passion project to try new things without outside interference. Pina was adamant about making it a limited series, believing that dilution had been an issue with his previous productions.

“We wanted to make a very small project in a simple way; we wanted to cross narrative and structural lines that we couldn’t cross in previous projects without any intermediaries”.Writer Esther Martinez Lobato

The casting of Money Heist took place in late 2016 and lasted more than two months.  The characters were not fully fleshed out at the start of this process and evolved based on the performances of the actors. Eva Leira and Yolanda Serrano, the casting directors, were looking for actors who could play empathetic robbers with believable love and family ties. The Professor was conceived as a charismatic yet shy villain capable of persuading the robbers to follow him and making the audience sympathetic to the robbers’ resistance to the powerful banks. However, developing the Professor’s role proved challenging because the character did not adhere to archetypal conventions and the producers were unsure of his level of brilliance. While the producers were looking for a 50-year-old Harvard professor when they discovered his Salva personality early on,

The series was notable for its heist subversions. While most heist films are told from a rational male Anglo-centric perspective, the series reframes the heist story by giving it a strong Spanish identity and telling it through Tokyo from a female perspective. The producers saw the cultural identity as an important part of the series’ personality because it made the story more relatable to viewers. Emotional dynamics such as friendship and love’s passion and impulsivity offset the ideal strategic crime for increased tension. Almost all of the main characters, including the relationship-opposing Professor, fall in love at some point.

Following the move to Netflix, the series was the most-watched series on Netflix for six weeks in a row and became one of the most popular series on IMDb (an online database of information related to films ).  It frequently trended on Twitter around the world, owing largely to celebrity comments on it.

Is Money Heist a true story?

The premise of Money Heist, involving the Professor and his ragtag team of eccentric robbers who carry out the dangerously ambitious 11-day heist, is purely fictitious.

Share
Previous Dry Fruits of Balochistan
Next WHY DO PEOPLE IGNORE US?